Are Apple Watches worth all the money?
I love all things that tell time. Least favorite is that mundane clock in our school classroom that seemed to run too fast and way too slow, conditional to a test or that boring teaching moment. Since this past April, I’ve been trying to follow anything about Apple Watch. I will try to distill it down for now, as it is information overload, and this blog will only give beginning details of what lies to come. I will also have some Tony’s Predictions at the end.

First, I want to discuss the rumors of the 18kt gold that supposedly Apple reinvented. It was said that Apple created a harder 18kt gold that is scratch “resistant” (that’s the key word). Nothing can be made scratch proof or water proof and Apples 18kt was to make theirs super-duper hard. My 31 years at being a goldsmith and alloying pure gold to a standard 18kt spec made me ask what the heck Apple has done to gold. It clearly did not make goldsmith sense. Now it was said they were mixing ceramic based particles in the gold to make it extremely scratch resistant. This may still happen but Rado Watch would have been the ones to do it, years ago, if anyone would of. Did I mention that we, DGJ, have been a Rado Watch Dealer, here in Frankfort IL since 1984 (he he he). Here is one backpedaling article that fixes the mis-guided information.

“All week, it’s been reported that Apple is using a “new gold” in the gold Apple Watch Edition. According to Bloomberg, Slate, Gizmodo and many others, Apple has patented a new process to create a “metal matrix composite” by mixing gold with ceramic particles. The composite supposedly allows Apple to save on the amount of gold it uses, while making the substance super-hard and adding other amazing properties. But according to Atakan Peker, a materials scientist and one of the co-inventors of Liquid-metal, which Apple holds an exclusive license on, it’s extremely unlikely Apple is using any kind of “new gold” for its watches.” *

The truth is. the technicians at Apple compress the Gold, basically squash it really, really tight. Something we, Distinctive Gold Jewelry, have with a line we carry called “Furrer-Jacot”. “ Furrer-Jacot is using high-quality platinum, gold and palladium alloys. The compressed precious metals guarantee maximum density, an absence of pores, pits and fissures, and help ensure a durable and pleasant feeling when worn.”**

So now that the fog over Frankfort Illinois is lifting, how are sales for Apple watch? (side note, yes it is called “Apple Watch” and is never referred as ‘The Apple Watch’). Sales are dismal? … well according to “According to the Wall Street Journal, a subsidiary of Advanced Semiconductor Engineering (ASE) and one of Apple’s suppliers for the Watch told investors that it fell short of a “break-even” number of shipments of its Apple Watch components during the second quarter, and it expects to fall short again in the third quarter.”***
But wait… are sales really dismal? Remember its Apple. So a brand name watch that we carry here at DGJ, is a brand called Hamilton, here is an example of the Below Zero, … 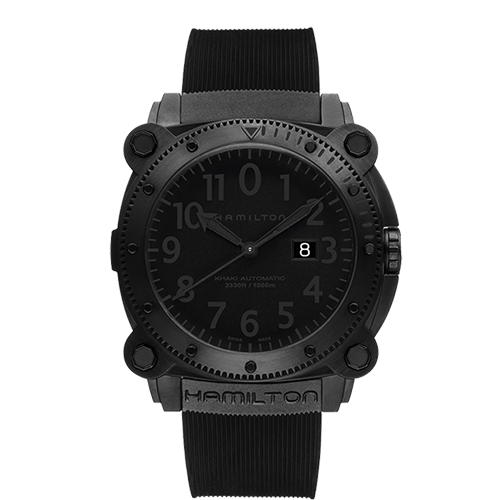 They have sold 120,000 units per year as of 2013.^ Apple on average so far has sold about 2 million units. Hamilton is by far one of the best brands Distinctive Gold carries. Hamilton watch, as an established brand wishes they could do that in a whole year.

Ok part 2 of The Big story on the Big Apple Watch is coming soon. But right now my first prediction. The Apple Watch will make Oprah’s Favorite Things for 2015.

Ok part 2 of “The Big story on Apple Watch”
“Even though Apple isn’t reporting specific sales figures on the Watch, Apple CEO Tim Cook went on record in July's quarterly earnings call to state that “sales of the watch did exceed [Apple’s] expectations” and that “Apple Watch sell-through was higher than the comparable launch periods of the original iPhone or the original iPad.” Cook also said that Watch sales actually increased in June compared to April and May, which ran counter to recent media reports.” Remember its Apple and I expected it to be another GRAND SLAM for them as a company.
Are the Swiss nervous? Is this a repeat of the great Seiko movement of the 1970’s or the current bragging rights of Citizen watch? I have always said that the Swiss do what they do very well, because of the mechanical watch industry. Swiss Mechanical movements survived the great quartz movement take over, and they will survive this. As an Apple user and a PC user I rest with the favor of loving Apple products and also loving the Mechanical world of watches. My goal is to find good information and present it in a way that is distilled down.
Now for my favorite part of the story; I am using information given from my personal request of Apple Watch users, three things that are Pro’s and three things that are Cons of an Apple Watch. I selected from my research three people that made the cut. (Yes picking three was not easy). So one conclusion has been that it was Only men that I came across from my findings. Unfortunately no ladies to ask :( ... So please do not be afraid to chime in here and let me know your thoughts. The men are as follows; all middle age men, Muhammad from Frankfort, Richard from Oakbrook, and Spencer from Frankfort. 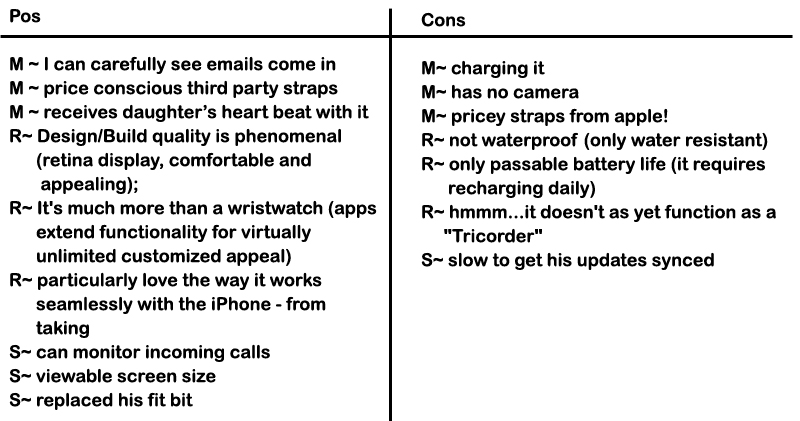 Spencer could not find any cons. I asked and asked and he barely gave a con even though I knew of a con from the conclusion of others, he declined to agree with even charging it every night. That’s why Spencer made the cut. He also loves apple as we can see. Yet the most interesting and my most favorite was from Muhammad. When he mentioned that he receives his daughter’s heartbeat with his Apple Watch, how does that not touch someone’s soul? It was such a passionate statement that at that moment I knew that Apple hit a home run.

Now to finish my Apple Watch Predictions:
-The next generation Apple Watch will be self-generating via solar power or oscillating wheel.
-An unopened, unused first generation Apple Watch will be sold at Auction in many years to come for a heck of a lot of tombola’s.
-Apple will Never be able to make a “waterproof” watch. Because I have a few people I know who know how to get water into a watch. Lol
And last but not least…
- Tony will probably not get one for Christmas